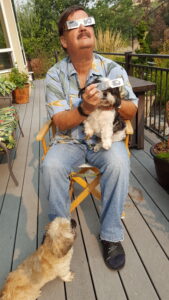 After graduating from the University of Oregon with degrees in Biology and Chemistry,

During the height of the Apple II popularity, Dale had five programs that he marketed

through his company and two programs available through the American Chemical Society.

For the past twenty-five plus years, Dale has been active as an AP Chemistry Exam Reader, Table Leader, and Question Leader. He has worked as a consultant for the College Board conducting weekend and week-long workshops. In 2007, Dale was appointed and served on the SAT Test Development Committee. Although he started as an AP Chemistry consultant, he soon became more involved in conducting various other workshops for the College Board and the National Math and Science Institute (NMSI).

Presently, he is certified to present AP Chemistry, the new Pre-AP Science courses, and NMSI AP Chemistry Student Study Sessions. When he retired from North Medford, Dale was approached by Syracuse High School in Utah to come in for one year and revamp the Chemistry curriculum. In one year, the school saw a 25% increase in their end of course exam.

While moving back to Oregon, he was invited to teach for St. Mary’s High School. Being at a small private school provides a lot of opportunities. Dale has taught Anatomy/Physiology, First year Chemistry, AP Chemistry, AP Physics 1, and AP Physics C – Mechanics.

Dale has presented College Board endorsed workshops at the following locations: